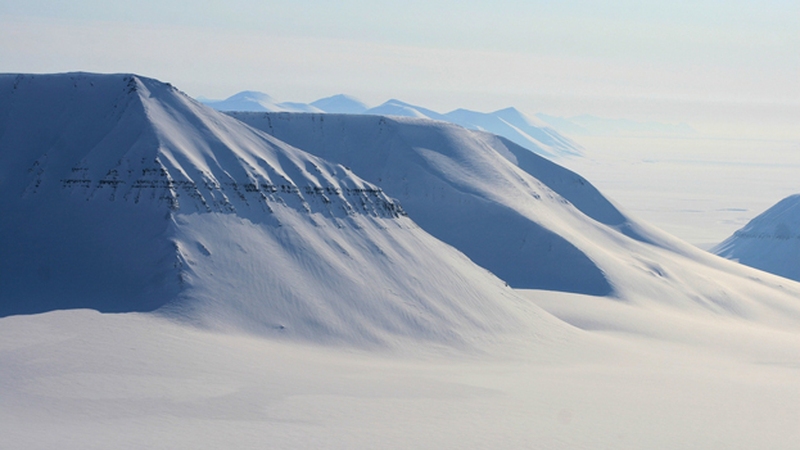 Suddenly our convoy comes to a stop in the narrow jaws of a cleft between the snows. Above, scree rock peaks menace, casting cold shadows across the valley. We are blind in both directions. And we are three people short. We wait. Our guide grows increasingly nervous. He doesn’t say as much, but the concern is etched across face. His eyes betray the fact he is worried. He unslings the repeater rifle from across his shoulder and efficiently loads four red cartridges. In the right hands the .444 calibre rounds have enough stopping power to fell a wild bear.

This is not a place to get stuck, I think to myself. A short exchange in clipped Norwegian and the rifle is being passed to one of our group, a young man from Bergen who has completed his military service. Our guide jumps on a snowmobile and races off hurriedly back down the track in search of the rest of our party. I decide to stay with the gun. From a group of eight, we have been reduced to three. We are to stay together and keep a lookout. The sense of vulnerability is humbling: two divided groups, one firearm, hundreds of hungry polar bears roaming the frozen wastes. On average three bears are killed here in self-defence every year, so the danger is real. 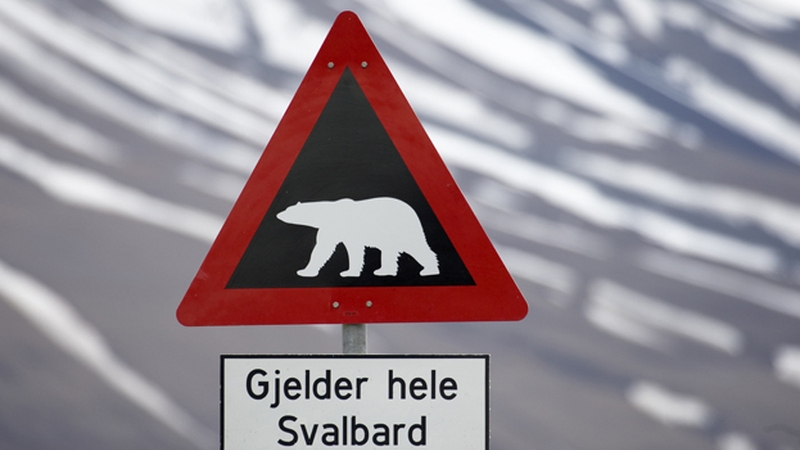 The rifle is not an overreaction. Anyone leaving a settlement has to be properly armed. Even children playing outside at the local school are afforded protection: a teacher carries a gun. Polar bears stalk these icy plains and lots of them. At least two stray into town every year. Locals go so far as to leave front doors unlocked in case anyone has an unexpected encounter.

After what seems an age the other half of our group emerges from along the path. A mechanical problem has put one of the snowmobiles out of action. “It’s got a hole in the engine, so we’ll have to leave it out here,” says our guide Nick. 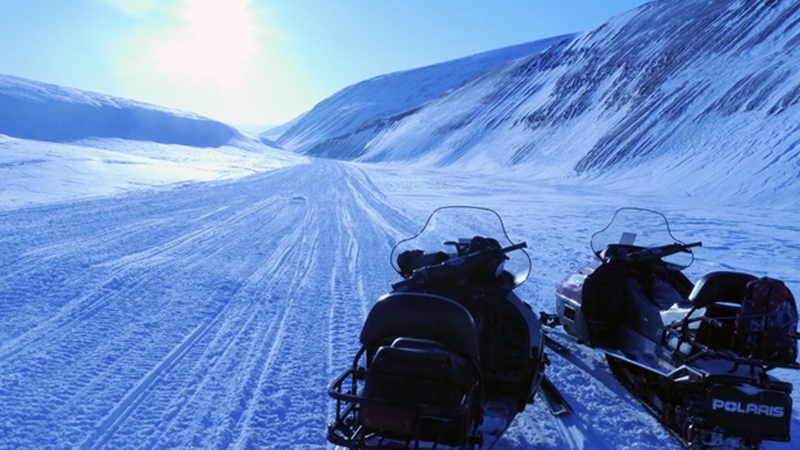 He’s a giant of man. The kind of cut-from-stone-Viking-type you’d like to have around if something went wrong and you found yourself caught out in the wild. Nick normally works in a mine, so this guiding business “isn’t even work,” he says. Who can blame him? After trying to coax him about his day job and the primitive conditions in the Svalbard mines, I bargain he must be glad to get out into the fresh air. “Yeah, it’s hell in the mines,” he counters.

We are on our way to Barentsburg, a Russian town deep inside Norwegian territory on the island of Spitsbergen. By a strange quirk of international diplomacy the Russians were allowed to maintain a presence here after the Spitsbergen Treaty was signed in 1920, effectively handing ownership of this polar territory to Norway. Under the terms of the treaty anyone can come to work here as long as they observe Norwegian regulations and can support themselves. So far only Russia, Sweden and a lonely group of ten Polish Polar researchers have accepted the icy invitation. Suspicion abounds that the real reason the Russians stay here is not for coal, but to maintain a foothold in a realm that is of strategic importance. 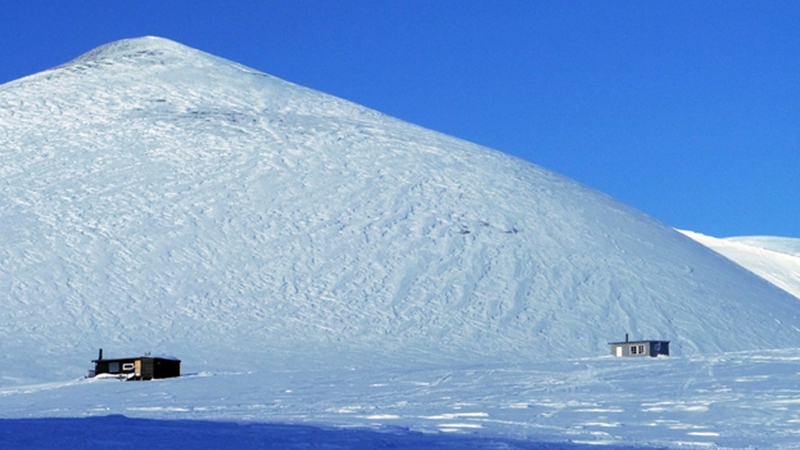 The Russians were actually the first to settle here though. They came in the 1700s to hunt walrus and bears, living in cabins, trapping foxes and killing seals for their meat. But it wasn’t until 1850 that they braved the winter to settle permanently year-round. They’ve since consolidated their presence after abandoning outposts at Pyramiden and Coles Bay. Today around 400 Russians and Ukrainians maintain a settlement on the shores of Grønfjorden. Most of them work in the power and water stations that provide the means to live here. There are few women. It really is working to live.

“These Russians have had a hard time of it,” says Nick. “When the Soviet Union collapsed they were really forgotten about, almost abandoned.” “They have it really tough out here and are totally isolated during the winter.” “It’s only in summer that cargo ships from Murmansk can get through to re-supply them.” 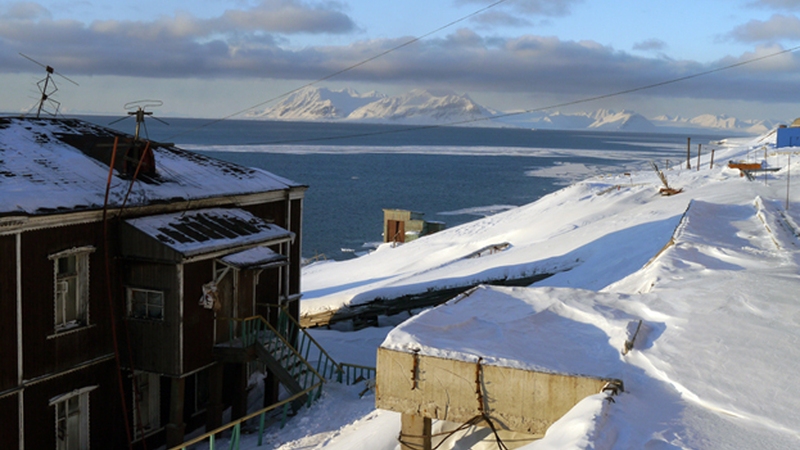 It’s a far cry from the seventies when the Russians had eight helicopters stationed here and regular flights in and out of the frozen airstrip. At that time the Norwegians had none. How fortunes change. Now the only working airfield is in Longyearbyen, built against Soviet wishes (they suspected military intentions, but relented after being allowed to post a permanently manned Aeroflot office there). Today a monument stands in Barentsburg to the victims of an air crash that killed all on board. Trailblazing is not without its hazards. “But luckily the Russian government has started to invest in the town again,” says Nick.

This town is a tale of isolation and desperation. There are no roads in or out and mistakes here can be costly. It’s a solid two-day hike back to the capital Longyearbyen - and that’s in summer. 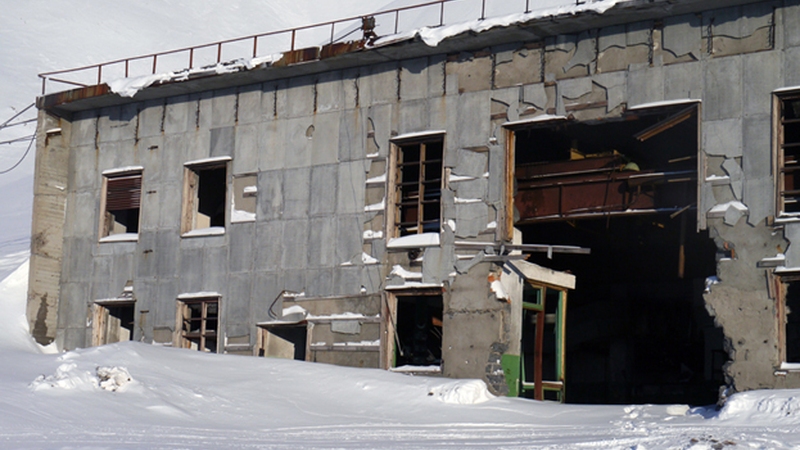 As we enter the town along a narrow snow track we pass the detritus of abandoned mines and industry, past the old docks and strewn power cables. On a bluff in the mountainside stands an old sub-station, long exposed to the elements. Inside banks of circuit breaks and dials offer guidance in worn Cyrillic.

Wandering the main street we pass a bust of Lenin standing watch over the decaying remnants of a forgotten town: old dilapidated accommodation blocks, clapboard buildings with broken windows sinking into the permafrost, a disused drinking den, its taps long dry. A colourful mural slapped onto the side of a brick building depicts the grandeur of St Basil’s Cathedral and the Kremlin in Moscow. Another on the Olympic sports centre celebrates the exploits of Soviet miners and sportsmen. 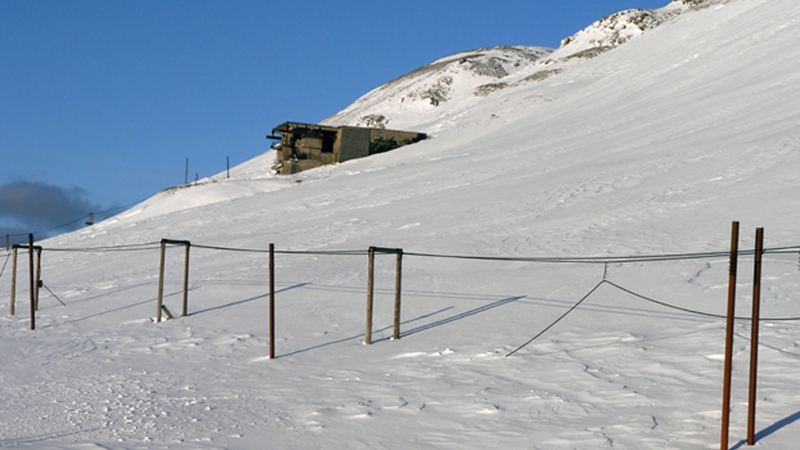 But there is some life here: a makeshift gift shop in the sports centre sells Soviet kitsch, while the ground floor bar of the new Polaris hotel has been converted into a dining room to serve warm borsht and shchi stew to the day trippers.

There’s a Soviet anti-chic to the décor, drab in its function and form. As well as being frozen, it's frozen in time. 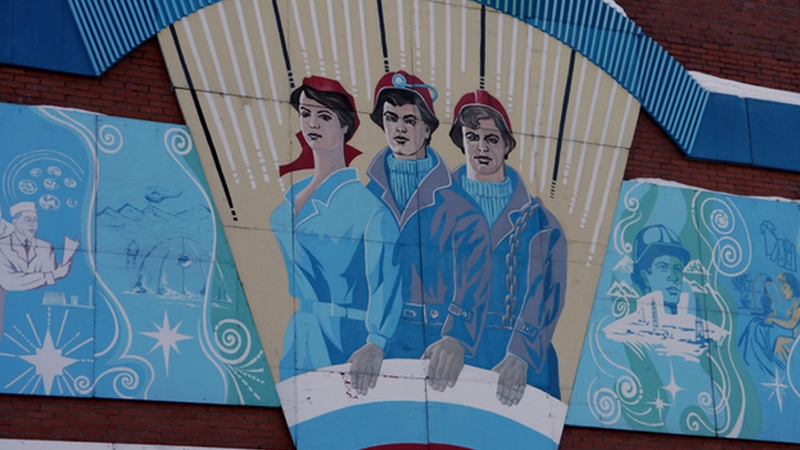 Nick tells me that he and his friends come here every year for a ‘camping’ trip.

“It’s mainly just a lot of drinking – the vodka is very good! And that way we can get around the quotas and just get drunk.”

Later back in ‘Longyear’, a local tells me that the situation in Barentsburg is delicate. 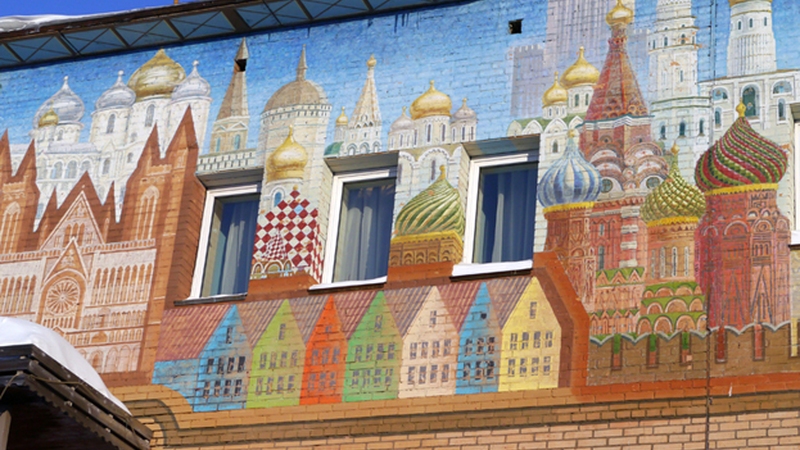 “They are very proud people and don’t accept handouts, but the community here collects donations of clothing and things they need to survive.”

“We have to be careful not to cause offence though.” 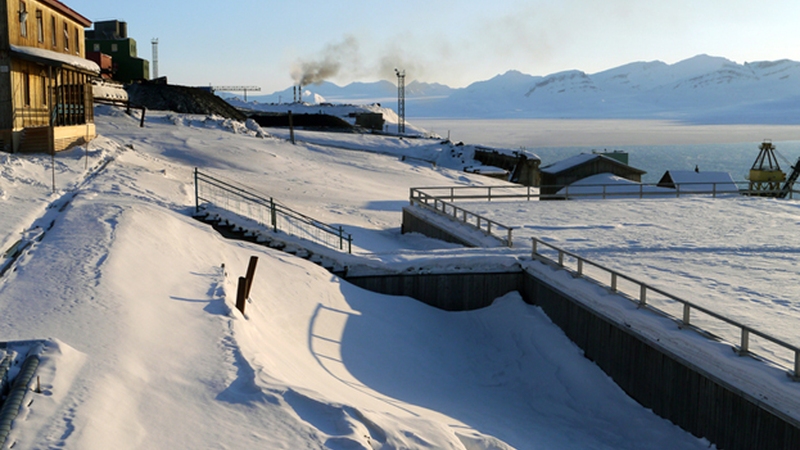 There is no smell here. The air is so dry that nothing breaks down. It is a graveyard to everything that has come before it. Even bodies fail to decompose; in fact it’s forbidden to die here. The cemetery back in Longyearbyen stopped accepting new residents 75 years ago. Recently scientists discovered traces of the 1917 epidemic influenza virus in tissue removed from one of the bodies.

It’s an eerie experience and the locals seem wary. But we can’t stay long. Getting caught out at night here simply isn’t an option. In an area as remote as this you can't always count on the cavalry coming to the rescue and need to be prepared for the fact you may be on your own should misfortune strike. If you were caught out, it would be a gamble as to which would get you first: the cold or a bear. Most here would offer even odds, though the cold would be a safe bet. 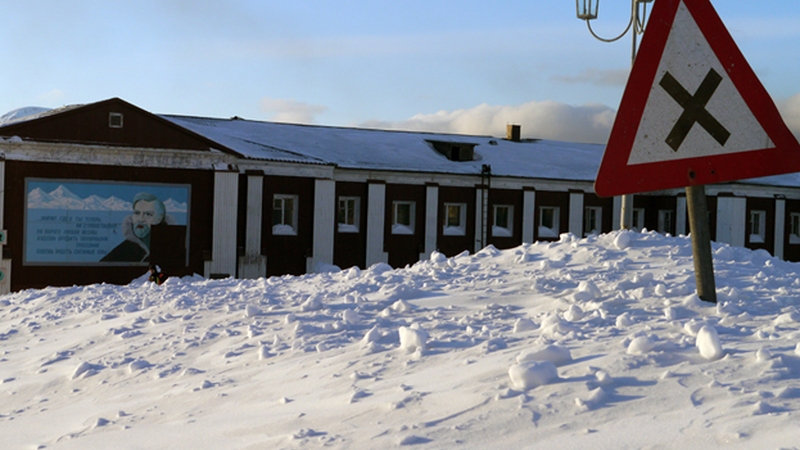 It's not a good idea to keep skin exposed in these low temperatures. Even a photo stop is tempting frostbite. The cold is constantly trying to burrow its way into bare areas. It wraps itself around the body and never relents.

The cold is biting. It burns at the back of the throat and on exposed flesh. But it does not the numb the primordial power of this place, nor diminish the otherworldly majesty of the landscape. 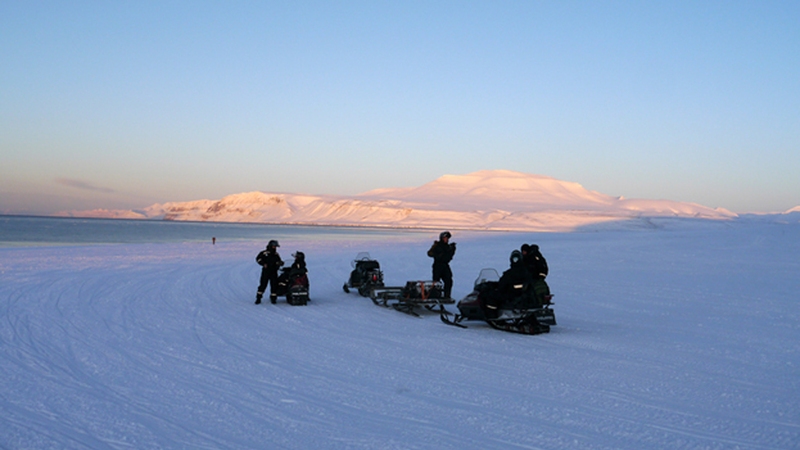 I am dressed in a heavy one-piece padded snowsuit, a balaclava, a neck wrap, fur lined leather mittens' thick woollen socks and huge boots. I decided to wear the suit over my woollen thermals, fleece and down jacket. It’s as if the cold has learnt a trick or two from the miners: it’s drilling into my core. The Norwegians in the group simply wear the suit over their thermals. Clearly they are used to the cold. However they have full face marks to keep out the cold. Later when my eyelashes and cheekbones have gathered an accumulation of ice, the face mask seems a good idea.

Svalbard floats like a battered Viking battle-axe among the drift ice just off the limit of the North Pole’s permanent pack ice, near the Russian territories of Frank Josef and Novaya Zemlya. 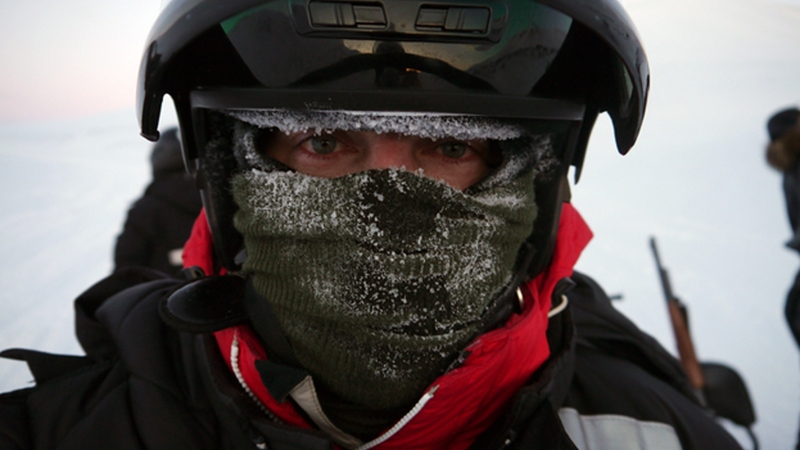 The serrated blades of its snowy mountains slice through the ice-covered ocean. From inland large snow covered glacial valleys drain into the desolate sea, from above they become a series of pristine dunes snaking off into the distance.

Tearing across a glacier valley surrounded by rosy mountaintops glinting in the setting sun is magical. The only light is cast from the moon and the faint pink glow on the horizon. And scale is magnified here. I imagine the melting veins crisscrossing the glacier’s frozen belly below. 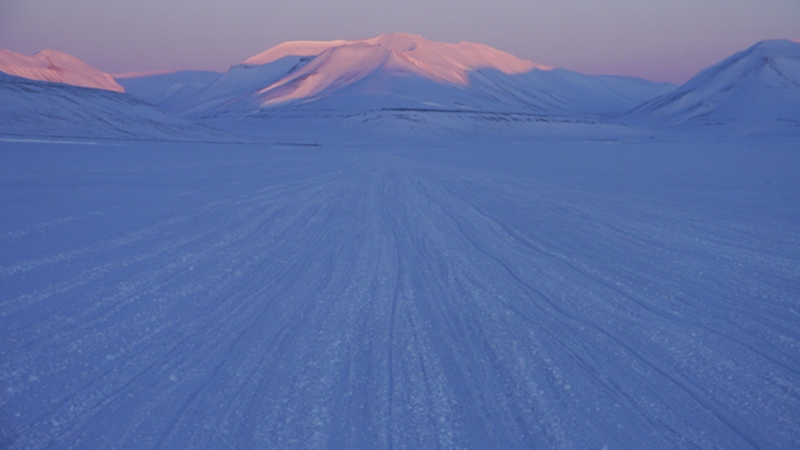 It’s an arctic desert seemingly devoid of existence, yet the barrenness brims with life: polar bears wandering the among the ice floes, wily arctic foxes nipping from here to there, herds of reindeer digging their hoofs through the snow in search of moss and lichen, pods of minke, beluga and killer whales patrolling the seas, along with dolphins, seals and walruses.

Svalbard is a playground for adventurous souls with a small streak of Scott or Amundsen in the blood. It has to be experienced to be enjoyed, lived to be loved And it’s a dream – all vivid and bright, fluffy and white. But it’s sometimes dark and dangerous too, and unease is never far mind. All around abandoned mines scar the hills and tales tell of men ripped limb from limb by ferocious bears. 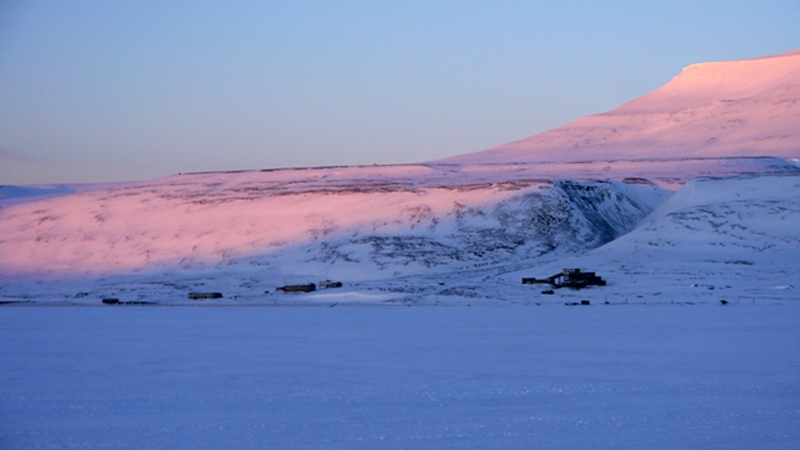 It all feels a bit like the Wild West in snow boots, all around are echoes of a frontier past. Some might be tempted to call a North Pole for novices, but that would be downplaying its dangers. 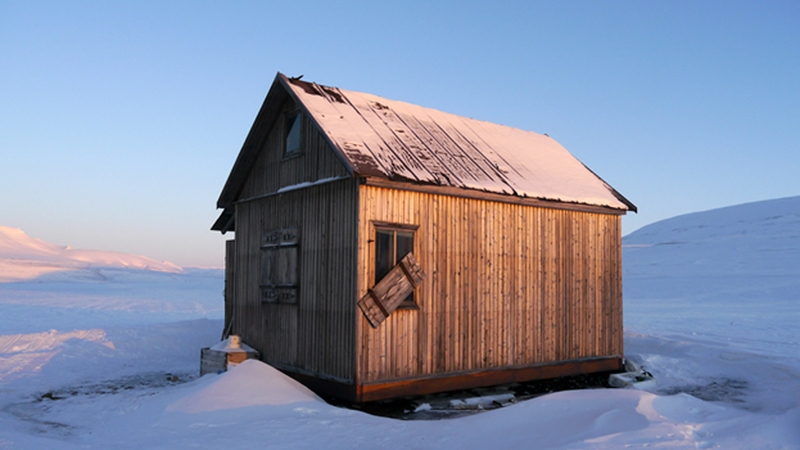 We pass a remote cabin on the coast made of imported materials, driftwood from Siberia and corrugated metal from abandoned mines. It was once used by miners during their downtime from the nearby mine at Coles Bay, another settlement abandoned by the Russians.

“The Germans bombed the hell out of it during the war,” Nick says. The seafront position would fetch a premium in most places in the world, but this is a beach shack for the brave only. 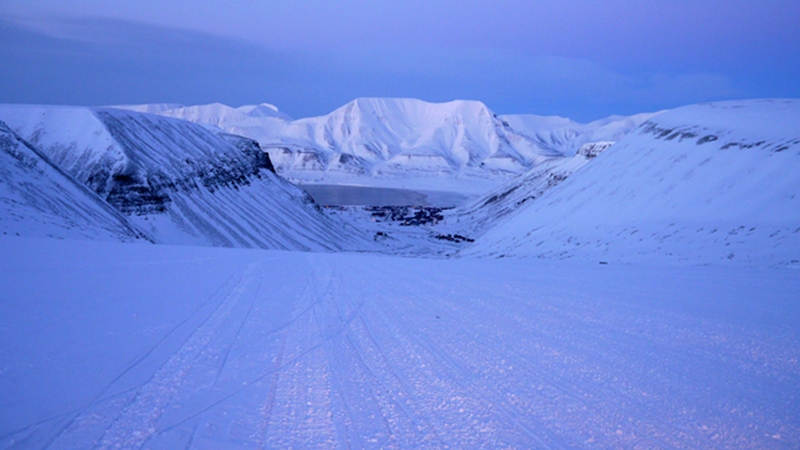 The return to Longyearbyen is welcome, but always that sense of adventure and danger. Where else would a kindergarten teacher carry a gun? 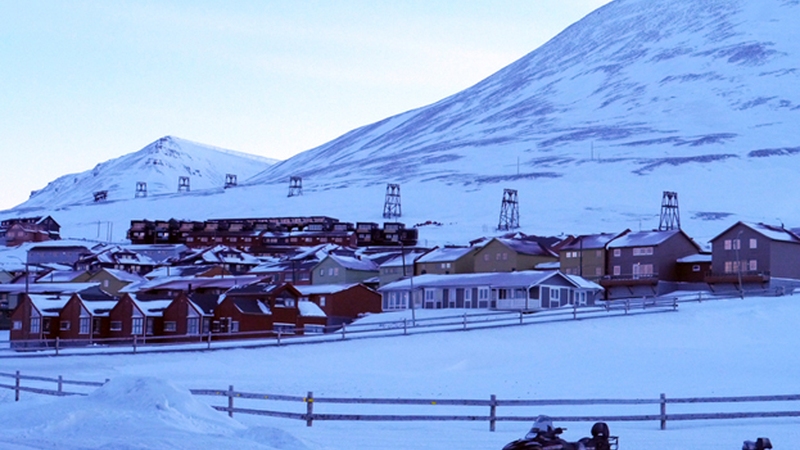