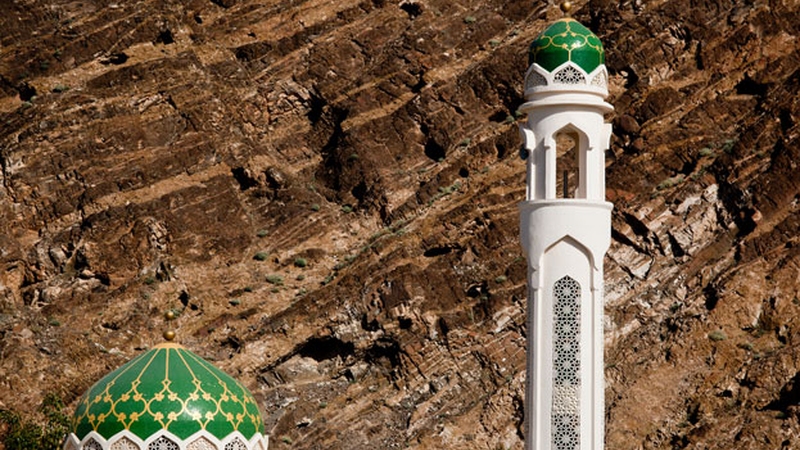 Oman is a rare mix of the exotic and familiar, the traditional and modern.

This is not the Middle East of shopping malls and high-rises, of crass developments and folly; it is the Arabia of old - of endless desert, welcoming wadis, oasis villages and stark, beautiful mountains.

Add to that the clutch of slick hotels dotted around the country - which range from desert camps to ornate palaces - and you have a destination just waiting to be discovered. 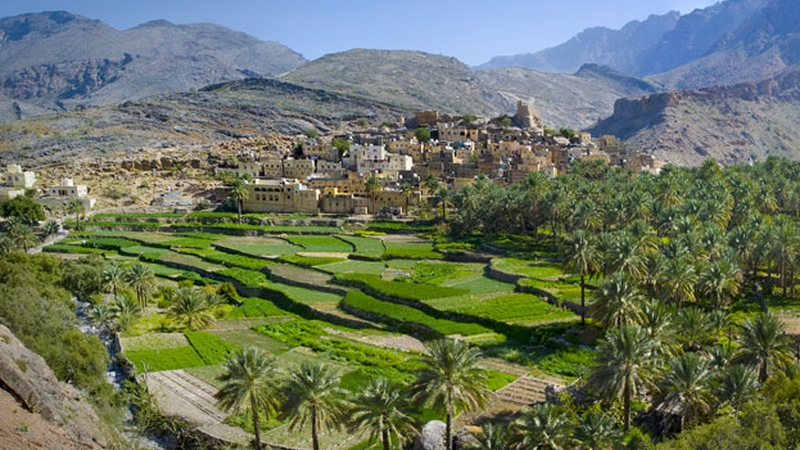 The skyline of low rise Muscat is a case in point; the result of Sultan Qaboos's decision to enshrine in law the need to build in traditional form, style, and colour. New government ministries and public buildings along embassy row are built in traditional Omani style. The new opera house is a prime example: the squat fort-like structure conspicuous by its adherence to established conventions.

Oman's is a story of managed modernisation. When Sultan Qaboos came to power in the 1970s there was 10 kilometres of bitumen road in the country, there's now 16,000 kilometres of it and good quality at that. 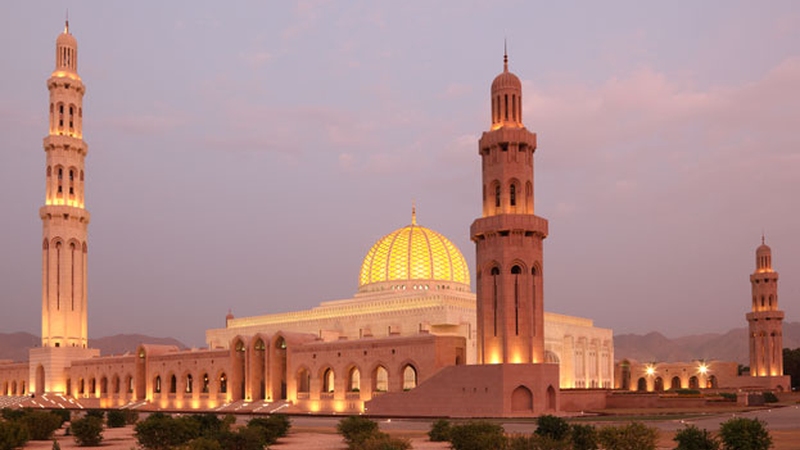 Public buildings and palaces all take cues from the country's heritage. Buildings cannot be built above a palm tree height, the colour chosen for the exterior - usually white - needs to be in keeping with a pre ordained vision of the outcome.

The Sultan Qaboos Grand Mosque was a gift from his majesty to the people. It's a grand place to worship and welcome foreigners who want to discover more about Islam. 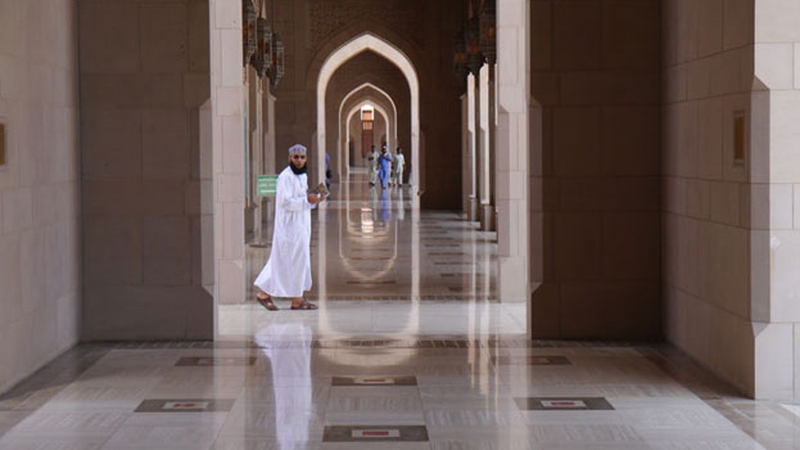 The amazing structure is the only mosque in Oman that can be visited by non-Muslims.

The Rajasthani sandstone exterior changes colour with the play of the light, immense carved doors are made from Burmese teak wood, the hand-woven, 25-tonne Iranian carpet is the second largest in the world, the entire interior is paneled in grey marble, while the enormous Swarovski crystal chandelier is the largest in the world. 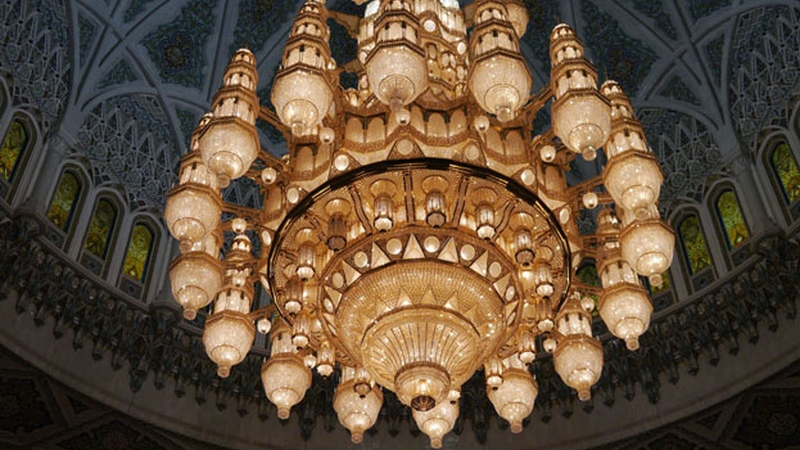 The Sultanate of Oman borders the Emirates, Saudi Arabia and The Yemen and is at every turn a curious mix. Throughout the country, women in black abayas and men in tassled dishdashas of spotless white and blue go about their business, clearly proud of their heritage.

Mutrah souk is the oldest souk in the Arabian Peninsula. Inside its silver shops you can rummage through bowls of coins from Portugal, China and imperial India. In the past Oman has used many different currencies: dinars, rupees, and even Reich mark from Nazi Germany.

On the waterfront the pretty fish market functions as it has done for centuries. 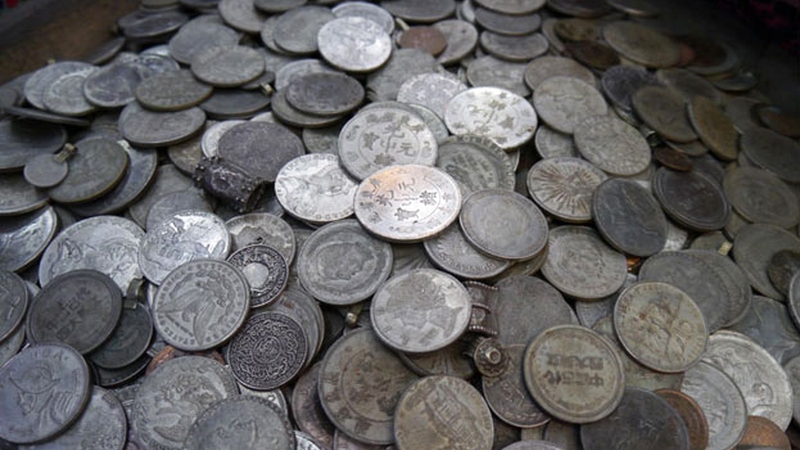 Three Portuguese forts jut out from the jagged rocks surrounding the port. From these sentinels the Portuguese controlled Muscat for around a hundred and fifty years and used it as a base for controlling the seas.

For a period Oman was a moderate regional power, with a kingdom extending across the Straits of Hormuz to Iran and Pakistan and down the east coast of Africa to Zanzibar, where the palace of Sa'id Ibn Sultan served as Oman's capital.

Further south in the port of Sur was where this great trade to Zanzibar, India and China originated. Today in the sweltering afternoon heat, men from Kerala toil in Sur's only dhow building factory as they have done for centuries. 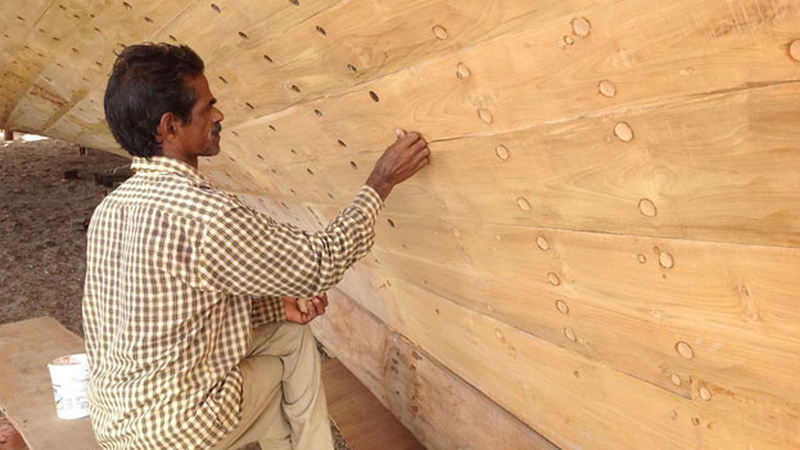 With sweat dripping from the sun reflecting off Burmese teak, they smooth and carve, plug holes with putty and create beautiful filigree patterns with hand tools.

Our guide Yusuf explains that the men come from Kerala. "Only men from the South of India can do this work. They come from Kerala - it's where they used to sail," he says.

"In Sur you have a lot of men from India and Zanzibar who came because of this trade. They would bring their families with them, they wouldn't marry local women." 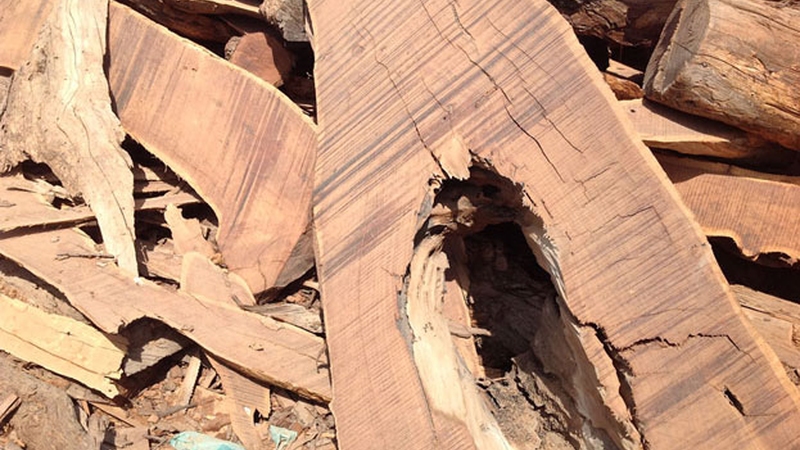 In the shipyard piles of rough teak wait by an old rail line, to be sanded, shaped and moulded. Here a worker slices pieces of wood through a whizzing bansaw, there a man patiently planes the great lengths, further away a whirring belt sander spins in anticipation. Traditionally the wood was plugged with wooden dowels to prevent it from cracking when it would expand and contract.

It will take 15 men six months to finish the vessel, before it can be pushed into the Gulf of Oman, to sail out past the old tower where imams and sultans would have collected taxes from sailors before they were allowed to dock here.

This is the only boat yard left in Sur. There used to be six on this street alone. Back then hundreds of these dhows would ply the waters from here, servicing the great trade routes to Zanzibar, India and China. 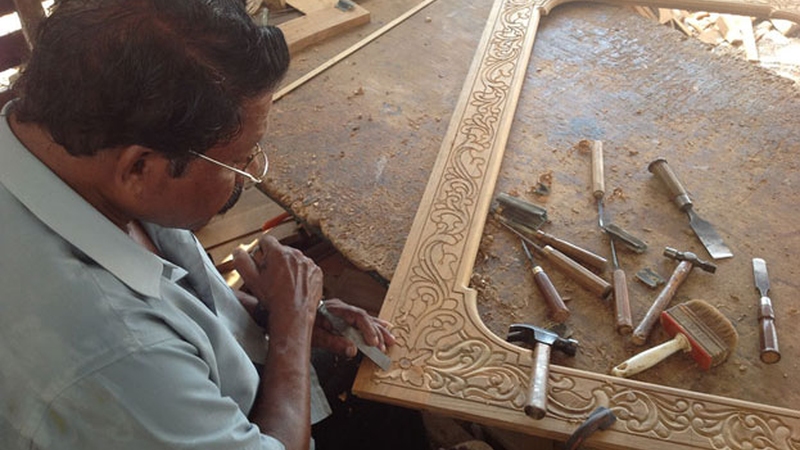 Further along the beach a herd of goats wanders along the shoreline promenade, while boats sit stuck on the beach sands next to rusty football posts and netting.

Outside Sur windswept acacia trees cling to the rocky, barren earth on the cliffs above the ocean. Close by a new highway cuts its path through the rock. A metaphor for the way Oman has blasted its way toward modernity.

Yet the traditional whitewashed stone and clay houses of the coastal villages stand firm. The mosque looks toward Mecca, not the sea where sailors and merchants came and went over the centuries, assuring as they did Oman's prosperity through the ages. 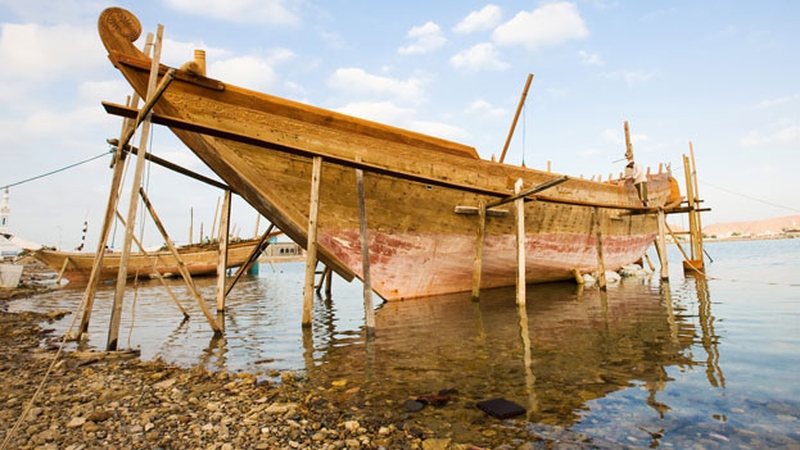 Dhows from the factories in Sur sailed these waters 50 years before the coming of Islam.

"Oman was the country that accepted Islam without the prophet visiting," Yusuf told us. "Let the Omanis be blessed, said the Prophet."

As we move along the highway into the interior, trunk roads become unmarked bitumen byways, then gravel dust tracks. The heat is palpable. 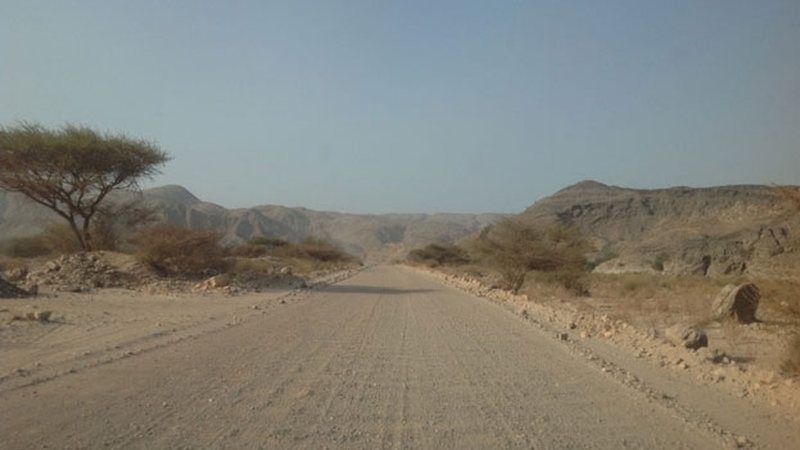 Road rules are in their infancy, crashes happen often. Cars travelling the wrong way on the verge are not uncommon and speeding is the norm.

A quick stop at the roadside mosque for Yusuf to perform afternoon prayers and we are on our way into Wahiba Sands. Although sometimes called the Sharqiya Sands, this enticing swathe of honey-coloured sands is most often referred to as Wahiba, after the name of the local tribe.

The pockmarked landscape is lunar; cocoa pop mountains loom up, the deep roots of acacia trees struggle through the earth for what little moisture there is. 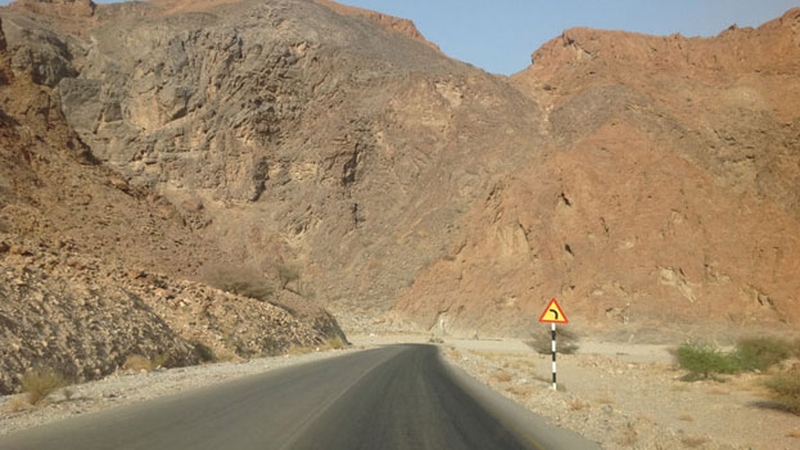 Along the way a pick up truck whizzes by with hissing camels protesting from the flatbed, knelt unnaturally on the hot metal. Better there than wandering on the road, only a week earlier an entire family was killed in a crash after they struck several camels that had found their way onto the road.

Outside hulking mountains tear through the ground, their angular attitude and clear strata evidence of the violent upheaval that led to their creation millions years ago.

The mountains lurch toward the sea, the desert sands blow toward the mountains, only the desolate expanse toward the kingdom of Saudi Arabia seems fixed in place. 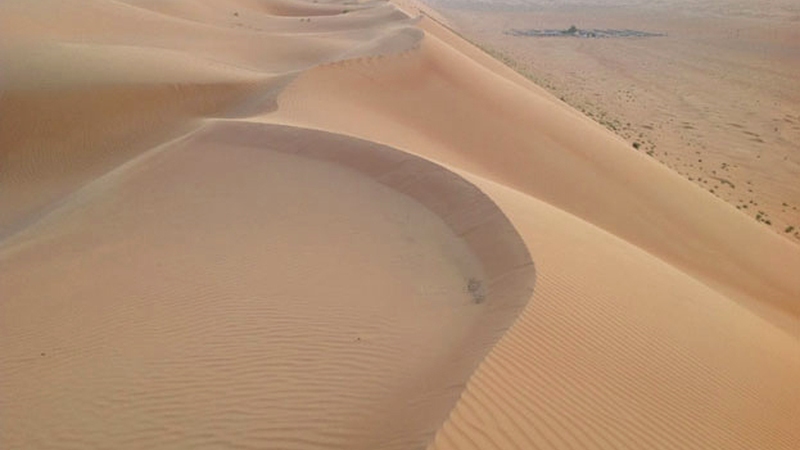 The same fabled empty quarter that Wilfred Thesiger crossed secretly by camel when trying to map this vast area in the forties.

At that time he travelled with local Bedu, people who still cling to their traditions. The Arabian Oryx Camp in the deserts of the Wahiba Sands is a venture by three local Bedouin brothers.

You can arrive by camel and will be welcomed by traditional Omani music. Bedouin women come to dance and paint henna for visitors to the camp. Rooms are carpeted in traditional Bedouin style and the experience is very authentic. For the adventurous they will organise two-day trips by 4WD or camel into the desert dunes to stay with Bedouin families. 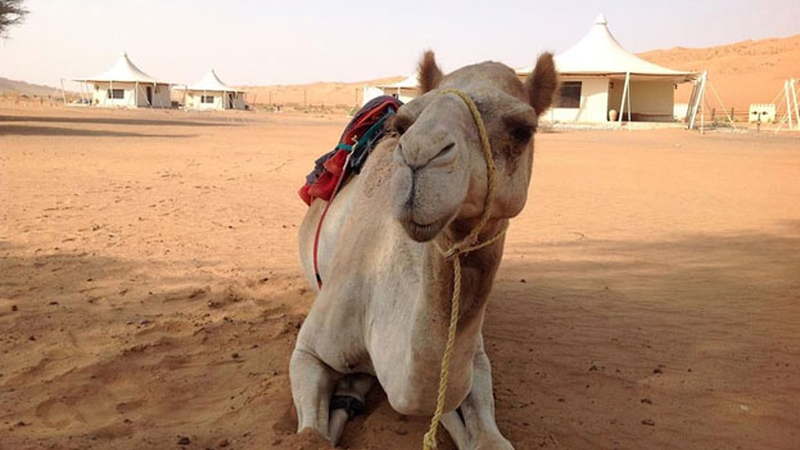 Not far away in the cleft between the hundred-metre-high rust red dunes is Desert Nights Camp. The permanent camp tents here are air conditioned and comfortable, if a little on the sparse side, but the overall effect is calming.

A herd of camels wanders about the edge of the camp and is available for short or long excursions into the sands.

Thrilling quad bike excursions take you it into the dunes for some great fun negotiating the rifts and valleys created by the changing winds. 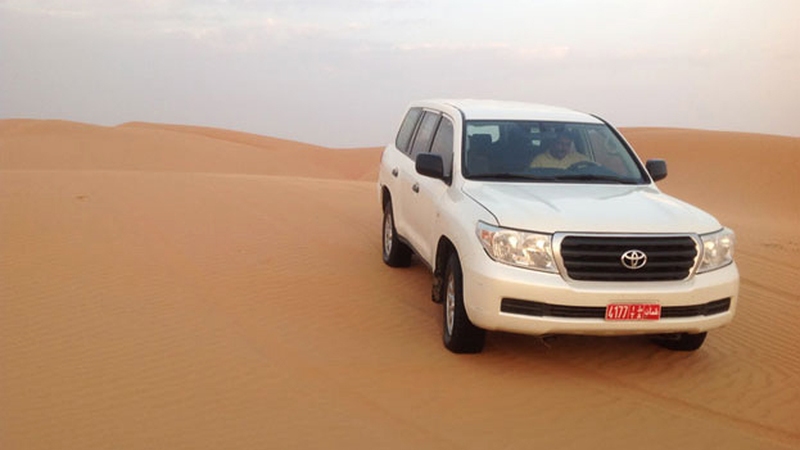 A near vertical scoot by 4WD to the top of the dunes to watch the sunset is a nightly event.

Dinner is buffet style in the main restaurant, where traditional Omani music is played in lute and drums.

Out of the desert and the nearby Wadi bin Khalid is a brush stroke of green against the brown earth and dust of the plains and the imposing, ever present mountains. Here and there a grove of palm dates appears. 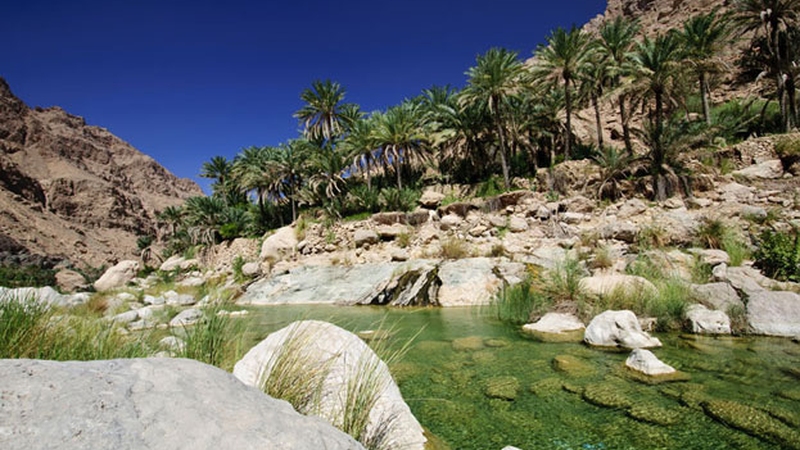 We push north toward the 9,000-ft spine of the Jabal al Akhdar, or Green Mountain. Past the police checkpoint and we are on our way up the steep pitch of new highway blasted out of the rock by French engineers after the former road was deemed a dangerous deathtrap. The smashed Toyota Land Cruiser by the roadside all the evidence that is needed.

It's relatively cool in the mountains, a cooling respite from the heat of the plain and the place for relaxing or trekking. Pomegranates blossom in the compound gardens high on the plateau, a valuable source of income for the villagers of Oman's highest town.

While we lunch, a herd of goats manages to find its way into the hotel gardens surrounding the infinity pool. Not bad pasture for goats at all really. Sadly a hotel worker doesn't agree and they are ushered outside, less they spoil the view. 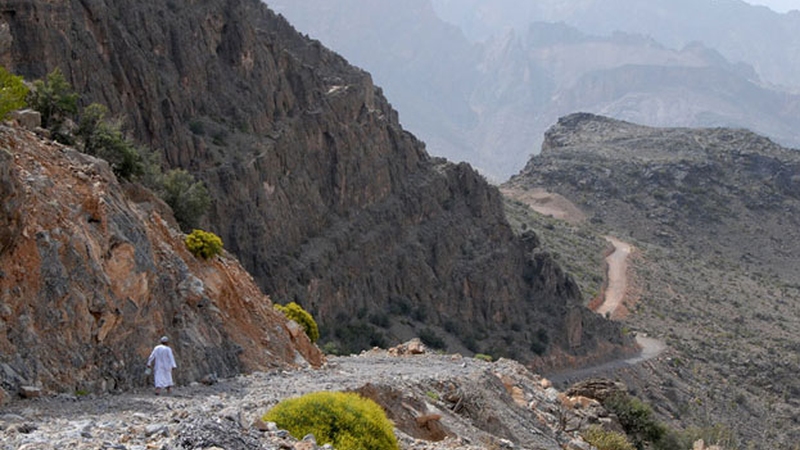 On our way back to Muscat we take shortcut through the mountains where whole sections of the road have been washed away by rain. On an old riverbed track trucks spew dust and rock from their underbellies.

The cossetted luxury of the state owned Ritz-Carlton Al Bustan Palace in Muscat is a world away from the desert sands. When foreign heads of state visit Muscat, they stay at the Al Bustan on the self-contained ninth floor, cared for exclusively by staff from the Sultan's palace.

The hotel's China Mood restaurant is one of the best Chinese restaurants in the Gulf. Run by a Beijing native, it's no wonder roast Peking duck and Beijing hot and soup are specialties. There's plenty of seafood and shellfish featured on the menu, such as Szechuan stir fried lobster, and they serve great dim sum daily. 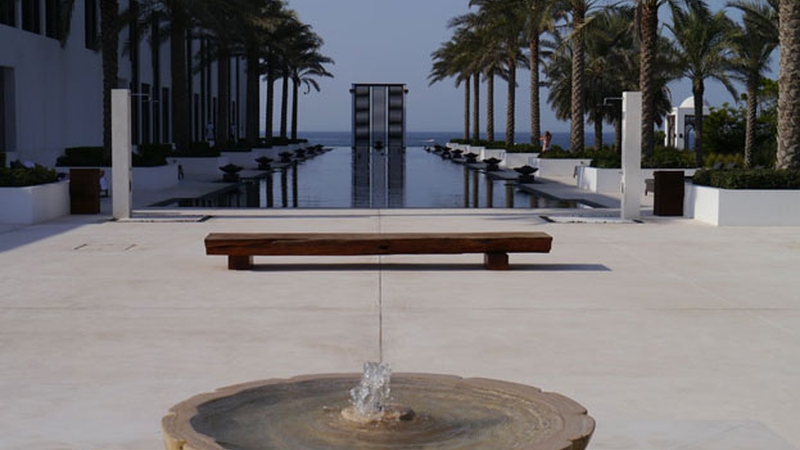 The Chedi is another hotel popular with Brits and expats. The Asian influenced low-rise resort of 150 rooms and suites is in the Al Azaiba district near the airport, the expat Wave development and the Greg Norman-designed Muscat Hills golf course.

Dinner at the Chedi by the flame-lit long pool is a must or choose from the six different restaurants. In the main dining area there a open-air kitchens, serving Thai, contemporary and Arabic fare.

Oman is in transition, so it's an exciting time to visit. Clean beaches, mountains, and farmland make it much more varied than the other Gulf States. 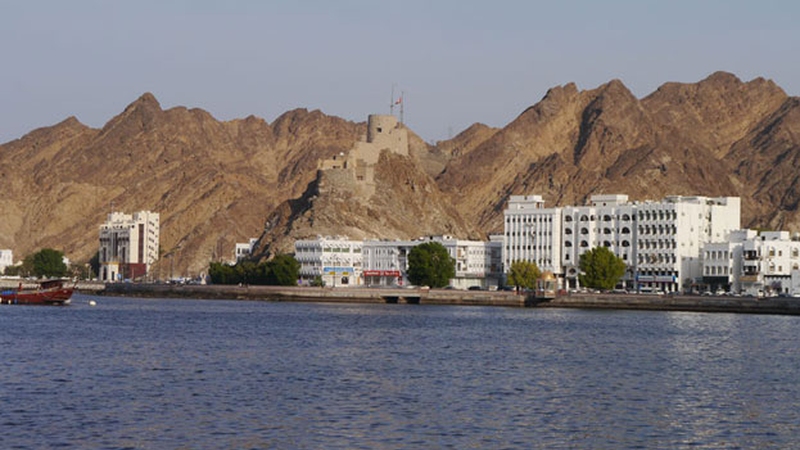 But this undiscovered gem might not remain so for long.

With well known brands such Banyan Tree, Missoni, and Four Seasons opening on the coast south of Muscat, and Starwood brands W, Westin and Element all opening in Muscat in the coming years, Oman will have to find a way to adapt to the inevitable influx of visitors.

So, can this travellers' paradise retain its unique appeal? Only time will tell. 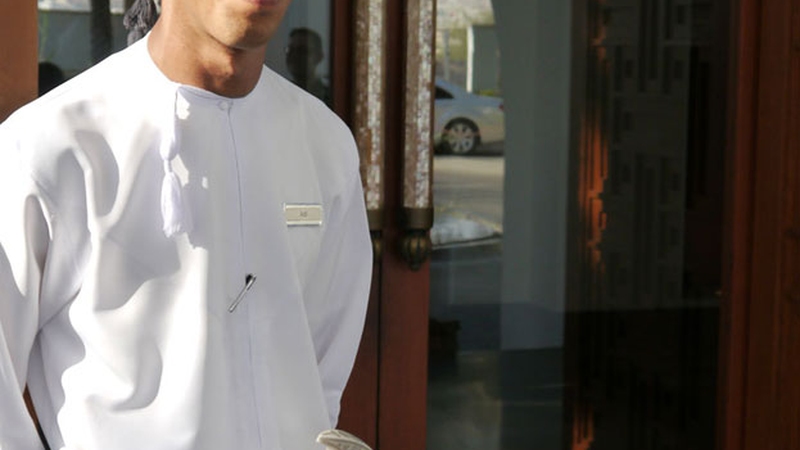